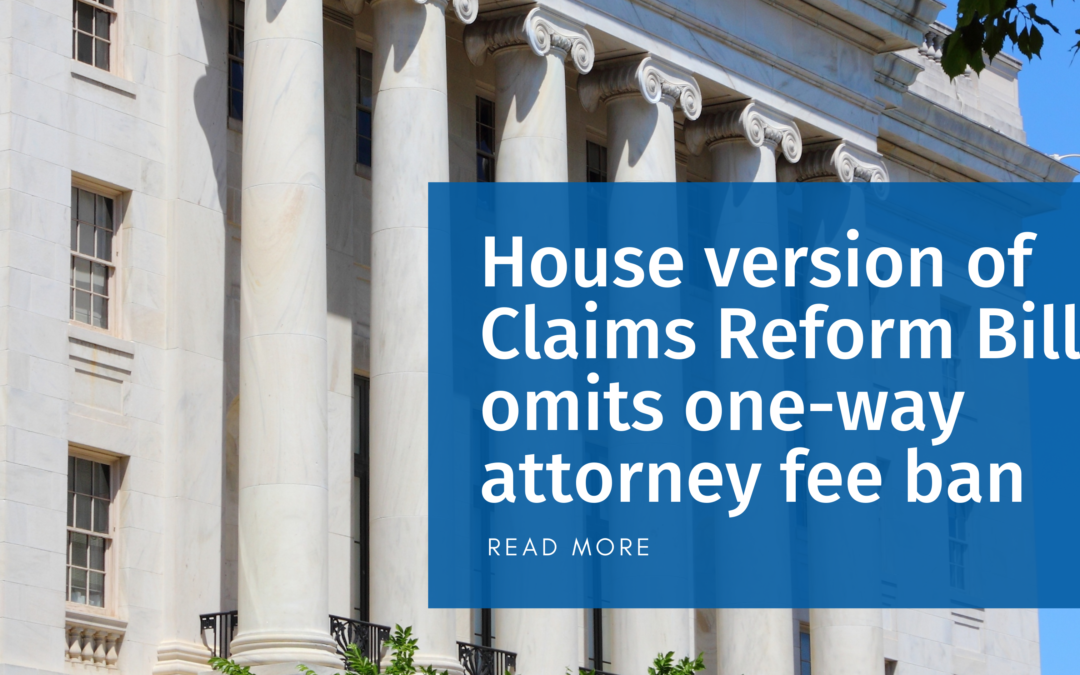 The bill differs from a recently filed Senate bill because it does not explicitly bar attorneys from collecting so-called one-way attorney fees when representing a third party, such as a repair contractor, assigned by a homeowner to collect benefits of a property insurance policy.

Attorney fees may not be awarded to either party if the amount awarded is less than a plaintiff initially requests and more than initially offered by an insurer, the bill says.

The bill, filed Tuesday by Reps. James “J.W.” Grant, R-Tampa, and Rene Plasencia, R-Titusville, was anticipated as a companion to a Senate bill filed on Feb. 17 by Dorothy Hukill that hewed closely to a legislative wish list promoted by state-run Citizens Property Insurance Corp.

“It may be a couple days before we are in a position to comment on it as they are looking at the details and mechanics of Rep. Grant’s proposal,” Citizens spokesman Michael Peltier said.

Michael Carlson, president of the Personal Insurance Federation of Florida, said he was shown a draft of the earlier bill before it was filed in the Senate. Asked for comment about the House bill, Carlson said his organization’s review was getting under way.

“So far it looks comparable to the draft language that was prepared by Citizens and OIR, which we support.” But he added time was needed to let the federation’s defense counsel study how the bill proposes to allow prevailing sides to collect attorney fees.

Barring attorneys from collecting one-way attorneys fees when representing third-party assignees is a key provision of the Senate bill. The insurance industry hopes it will curtail what they consider abuses of a state law, in place in various forms since 1893, that enables customers to challenge claims denials without fear of being forced to pay insurers’ attorneys fees.

Over the past decade, attorneys and contractors have been filing thousands of lawsuits with little fear of being forced to pay insurers’ legal fees, insurers contend. As the suits inflate costs of claims, insurers raise rates to transfer those costs to policyholders.

After the Senate bill was filed, several plaintiffs attorneys said the one-way fee restriction would dissuade policyholders from assigning post-loss benefits, a right that courts have repeatedly reinforced, and predicted it would be challenged in court

The latest bill might be a retreat by insurers from the one-way fee prohibition “to make it more palatable to the Legislature,” said Imran Malik of Malik Law P.A. in Maitland.

Ely Levy, a trial lawyer at Hollywood-based Militzok & Levy P.A., said fee-recovery provisions in the House bill are unnecessary because a separate law allows insurers to recover fees “in any case that is frivolously filed and prosecuted.”

The existence of that law, he added, is also why “there is no need to alter the longstanding attorneys fee statute,” he said.

A 21-day notification of intent to sue in the House bill would address insurers’ complaints that they often first learn of new claims only when suits are filed, giving them no time to inspect damages.

But Levy questioned what the 21-day notice would accomplish. “Most lawyers put carriers on notice by sending a pre-suit demand letter before filing suit,” he said.

Karen Kees, spokeswoman for the state Office of Insurance Regulation, which worked with Hukill to write the Senate bill, said the new bill “contains many of the consumer protections” that are in Hukill’s bill, including provisions barring contractors from penalizing consumers who rescind assignments within seven days.

Kees said state insurance regulators continue to believe that one-way attorney fees “are a driver behind the increased claim frequency and severity.”

Carolyn Johnson, spokeswoman for the Florida Chamber, which has been campaigning for assignment of benefits reforms, said the House bill “contains some worthy provisions for protecting consumers from fraud and abuse.”